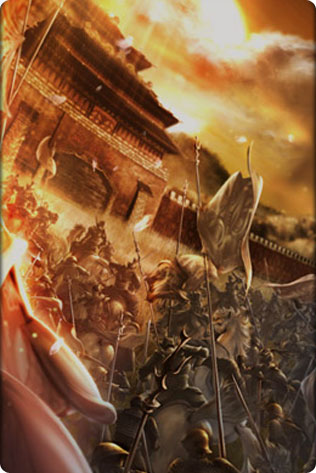 According to ancient legend, the hero, Qin Shi Huangdi (also known as Qin Shi Huang), put an end to an age of chaos and turmoil by unifying China.

Calling himself the “Son of the Sky”, Qin Shi Huangdi dreamed of one day becoming immortal.

So passionate was his ambition, Emperor Huangdi sent over 500 young boys and girls to Trinity Mountain as sacrifices, and hundreds of Taoist mystics throughout the land in order to ascertain the secrets of immortality. Tirelessly and mercilessly, Huangdi sought out and extinguished all those who opposed him while trying everything in his power to become a god.

Alas, as is the way of all mortal things, Qin Shi Huang was unable to prevent his death or the fall of his Imperial dynasty. All traces of his glory and wealth vanished from the world when his palace, Ah-Bang Palace, burned down after his death.

Many years later in the age of our fathers, two decades ago, the sun disappeared as darkness spread throughout the heavens and the earth. In this darkness, Twelve men, “Demons”, mysteriously appeared shaking the very foundations of the earth with their chaos and destruction. During this time many houses and clans banded together to fight the Demons, but to no avail. The famed houses of Tae-San Pa of San-Dong, Gun-Pa of Hae-Nam, Bok-Gun, Kwang-Dong, Myo-Gang, Sa-Chun, Ok-Mun Guan, Dae-Mak, and San Suh all fell under the hands of the Twelve Demons, leaving the people of the land helpless and fearful. As the Twelve Demons ravaged the people and land unchecked, the lands were awash with the blood of their victims.

Following the massive failure of the demon hunters, the legendary Shaolin monks resolutely gathered to face this evil force. Yet to the great dismay of the people, all hope for peace and tranquility seemed lost when even the legendary power of Shaolin could not stop the rampage of the Twelve Demons. The people’s hope ebbed and faded as they watched their center of martial power, the Shaolin Temple, burn slowly and painfully down to ashes.

But in the time of deepest despair and the darkest of days, a mysterious hero appeared and instilled hope. Devising a plan which utilized his superior skills, the mysterious hero lured the Twelve Demons into a trap where 3,000 of the hero’s best soldiers were awaiting. After ten long and grueling days of nonstop combat, all Twelve Demons were slain at the cost of all 3,000 of the hero’s men.

To this day, no one knows exactly why the Twelve Demons ravaged the land, but rumor has it that they were searching for Qin Shi Huang’s most prized possession, his Thousand Year Treasure… 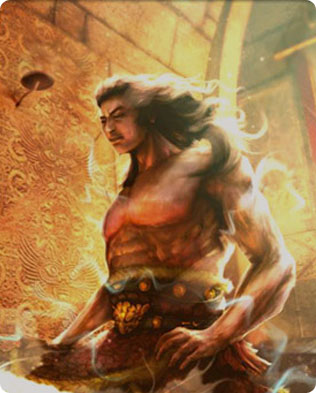 But on a sad and twisted day, The Great Dragon was found dead with evidence of murder pointing towards someone within his house. Ironically, the alleged murderer was no warrior or fighter; it was his wife.

It is rumored, however, that upon discovering The Great Dragon, members of the house found his wife cradling his dead body repeatedly whispering, “They’re back….the Twelve of them have returned….”.

Upon hearing about the death of their hero, the people of the land were shocked and outraged. Panic spread across the land as they questioned each other. What of the prophecy? Will there be grave danger now that our hero has died? What exactly was the wife referring to when she mentioned, “the Twelve of them”? Could it be that the Twelve Demons have returned? Who will save us from them if they have?

Fear and apprehension spread like wildfire across the land as news of The Great Dragon’s death spread. Uncertainty reigned supreme in everyone’s heart. If the Twelve Dragons have truly returned from their graves, all of heaven and earth would be in grave danger, unless a new hero was to present himself…